Apps with the Appodal Beta is being suspended on PlayMarket

in last 10 days using Appodeal Beta and 3606, I built and uploaded two apps on PlayMarket but yesterday one and today another got suspended because of a non-compliant version of Vungle SDK which contains code to download or install applications from unknown sources outside of Google Play.

Have you faced such a problem?

Yes, the same happened to me, my apps got suspended for using Vungle SDK in Appodeal Beta. I had to disable the Vungle plugin and re-upload the apps. I thought that this issue was already fixed?

Please read my old response at the bottom of this thread.

According to Appodeal change log the last time they changed Vungle was:

I had actually updated all my apps and uploaded but at that time I thought the Vungle SDK was already updated so I didn’t disable Vungle. Right now I can not upload new version.

Hahahah. You make it sound like I am the maker of the bad news. I am just copy and pasting the change logs from their site.

And actually when you look at the appodeal wizard for the latest non-beta version of Appodeal it does not include Vungle as an option:

Looking at their Artifactory they don’t even have a version Vungle for 2.6.5 of Appodeal:

@agramonte aren’t you the one who is causing all these problems in Solard2D? haha

It’s my fault that I didn’t read well last time when I was warned to update the apps. Yesterday I disabled Vungle and updated the apps that are still not suspended. Waiting for the answer from Google to unsuspend the suspended apps and let me update those too.

My story (and a warning to others facing this):

I had the exact same thing happen to me a few days ago, suspended/removed due to the Vungle SDK. I opened an appeal for that app, and immediately uploaded versions of my other apps with Vungle commented out in the Appodeal beta plugin section of build.settings, so that they didn’t get removed as well.

I just received an email today that one of those aforementioned apps -that I immediately fixed–was suspended for the same reason (Vungle). I thought perhaps there was a delay in the system (as in, Google was flagging the previous apk which still had Vungle), however, the apk version code was indeed the newest fixed version.

I have filed an appeal for that app as well, but I am now very apprehensive that it will happen to my other remaining app on the store which has a massive user base. To prevent further catastrophe, I uploaded a version of my only remaining live app containing no appodeal code at all.

Are you sure you don’t have any alpha or beta build on the store still with the old Vungle. Google scans them all and rejects your app even if the apk is in beta or alpha. I have a few apps with appodeal beta with vungle commented out and none have been rejected yet.

@agramonte Thanks for the reply agramonte! The last time I had an active beta release for any of my apps was several production apk’s back, and since then, I have only released production apk’s with version codes superseding any previously uploaded apk’s; this goes for all my apps.

Is there anywhere else in the Play console I should be checking? As far as I know, there is no way to delete artifacts, and I can’t think of where else to look for what you’re describing. I want to do anything possible to avoid this remaining app from getting removed as well.

I would push your active release as a beta. If any old beta are still sitting around with Vungle they will pull down your production app. This has happened twice to me before.

With all of that in mind, is there still something I should be doing to further protect myself? I don’t think you can delete artifacts from the library. 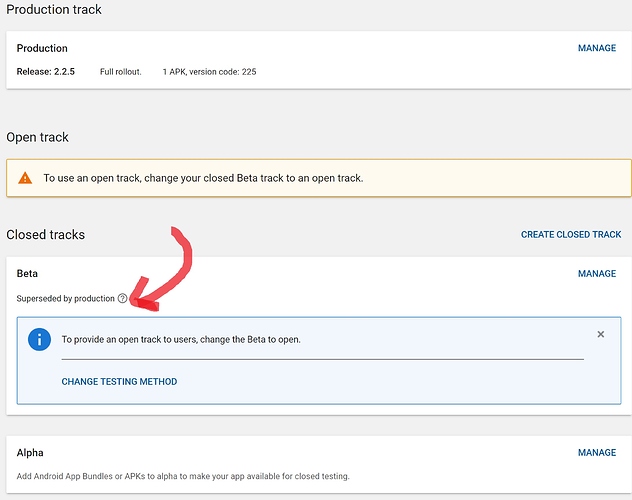 lol @ ‘fancy testing results’. Thanks for your thoughts. I still have no idea why they removed the second app, Vungle had already been removed at that point. Very disconcerting!

Truly, the equivalent transpired, my applications got suspended for utilizing Vungle SDK in Appodeal Beta. I needed to incapacitate the Vungle module and re-transfer the applications.
blackfridayvpn.co